Travelling, it seems, is actually quite hard work. By the time i got to Santiago i was ready to stay in one place for a while; perhaps even unpack my suitcase! A vacation was in order, and Buenos Aires was just the ticket. It meant missing a few stops on the tour, but the group would catch up with me giving me a fortnight to enjoy the city.

On the morning of departure, i crept down the stairs of the hostel to meet my 4am taxi, trying desperately not to wake anyone. Best intentions went to hell when I slipped and fell down the stairs, landing at the bottom with my backpack strapped to my back  underneath me. I could hear my taxi outside as i struggled to detach myself from my pack so i could stand up and open the door. Great start.

Thankfully, Operation Airport passed without event and i arrived in BA to be greeted by the immigration queue from Hell and my favourite travel buddy from Texas. Arrived at the hostel too early to check in, so went for a stroll around the park and some very decent Lebanese food. The parks at Palermo are lovely, and complete with rose gardens, lakes, geese and a path for bikes and blades. Those chicks on rollerblades were already starting to give me a body-image problem, and I’d only been there an hour!

Now at this point please accept my apologies for randomness – i remember everything i did and everywhere i went, but not the order i did any of it in. Seems Rio has gone to my head. I’ll do my best …!

So the first great thing about BA is the food. Between Tripadvisor, recommendations from friends and a handy little blog called pickupthefork.com, we managed to eat very well. First up, Astrid Y Gaston – a Peruvian / Franco gourmet heaven. We hit this place twice – the first night and the last. Everything was sumptuously tasty and beautifully presented, and despite best intentions on the second visit of delving into the pudding menu, the pork belly i ordered rendered me incapable without a tactical chunder, which was just way too wasteful to even contemplate.

Another hit was La Cabrera in Palermo Soho. This is a steak place – in fact, most places in BA are parillas or ‘steak places’. They also have a happy hour, which makes a big and wonderful steak dinner with wine very cheap given everything is half price. We hit this place twice too, and ordered the same thing both times. Actually we hit it 3 times if you count the night we ate there, left, went for a few cocktails, then rocked up again at midnight when i decided I wanted apple pie and ice cream. They don’t serve pudding during happy hour, but you do get a lollipop tree!

The top rated restaurant in BA (according to Tripadvisor) is a place called Nola. I was aware of the concept of a ‘closed door’ restaurant, but didn’t realise how big a part they are of the eating culture in BA until a flip through Tripadvisor’s top-rated turned up several of them. A closed door restaurant is effectively a dinner party – a restaurant in someone’s home. You get the address when you book. It sounded interesting, so we thought we’d give it a try! Nola is run by a girl from New Orleans, who serves up dishes with a little creole flair. Her boyfriend is a wine student and together they are running a successful little enterprise. The place has only been going a few months, but in that time has reached Tripadvisor’s #1 spot in the BA restaurant league.

We arrived at the address and were greeted by champagne, and 12 other guests. We put away 4 courses including a mango gazpacho and a fried green tomato salad, with paired wines. It wasn’t cheap by BA standards, but it was absolutely fantastic. We rolled out of there full of food and wine, and went in search of cocktails. Several shooters later it was time to hit one more bar for ‘one for the road’ which turned into ‘several for the road and more dessert’ when we arrived in time to be handed a big slice of cake by a local guy celebrating his birthday. We rolled into bed at around 5am, hoping against hope that the ensuing hangover would be mild. Well, my hangover was mild anyway …!

So what else is there to do in BA besides eat and drink? Well, quite a bit actually if you can be arsed. They have a great zoo there with lots of different animals, some of which you can hand-feed with the special food you can buy in plastic buckets. We spent a happy hour or so feeding the goats and deer, which is fun when you get over the fear of losing a finger. They also have a species which looks like an overgrown rabbit or hare but with longer legs – these run free around the zoo, and it’s hilarious to watch the kids chase them. The ones with babies tend to stay inside the buffalo enclosure. Can’t think why …!

We also visited the cemetery at Recoleta. Not as macabre as it sounds – in fact most visitors to the city visit Recoleta to see the rows upon rows of beautifully ornate tombes belonging to BA’s great and good. The place certainly has a ‘presence’ – whether or not you believe in that sort of thing. I had an unshakable sense of being watched, and was torn between wanting to sit there all afternoon and the irrational desire to run away. Needless to say, I tried to be respectful about where i stuck my camera.

Another ‘must do’ on the list is to take in a show. There’s plenty of Tango, but there are also a number of theatres hosting other productions. We went to a show called ‘Stravaganza’, which was Cirque du Soleil-esq – it was water-themed and had the performers jumping in and out of the pool that was built into the stage. More chicks in thongs (g-bangers to you Aussies!) – my body image problem is getting worse! Anyway, despite making me feel like a bit of a biffer, it was pretty cool if a little weird! We also went to a tango show, which was very glam! All sequins and chandeliers, with some amazing dance performances, both dance and musical. Note to self – take dance lessons.

An afternoon stroll around the botanical gardens is another way to unwind in the city. What makes the botanical gardens in BA different to anywhere else is the cat population. I don’t know who (if anyone) owns them, or feeds them, but there are hundreds of them. They lie on the benches, in the middle of the paths, everywhere! There’s something almost creepy about it, and it made me think of that weird Cravendale advert – the one that goes on about the dangers posed by cats that have opposable thumbs.

Bicycle hire is also really popular in BA. We hired bikes for an afternoon to go for a ride around Palermo; i was surprised at how ‘cycle-friendly’ the city is with cycle lanes a plenty so there’s no need for out-of-practice cyclists like myself to mix with the traffic. We made a loop through the park too – it was a weekend so the cyclists and skaters were out in force enjoying the sunshine and the atmosphere was buzzing.

Every Monday night the drums sound and the hippies come out to play when the group, La Bomba de Tiempo  (the Time Bomb) takes the stage at the Konex Cultural Center. BDT are a 17 piece improvisational percussion group and they are, if i do say so myself, pretty awesome. We didn’t stay for the whole set, but the place was packed and the atmosphere was electric. The performances are high energy and the members take turns to conduct a number – each piece is quite different with the influence of different beats from Central America, Africa etc. There was also a really overpowering stench of marijuana, which was almost nauseating and annoyingly meant i would have to wash my dress in the next laundry load. That aside, if you’re in BA in summer then look out for it and go as the music is fabulous!

Following on the success of the closed door restaurant experience, we thought we’d try another one. By this point we’d eaten our weight in steak, so a vegetarian restaurant was an interesting proposition. It was high-rated on Tripadvisor, so we figured it had to be good. After all, the last one was awesome. It sucked, and that’s all I’m going to say about it because that’s all the column inches it deserves. They obviously have some great mates who wrote the TA reviews! I love all my veggie friends dearly, but when you all band together it gets weird. Sorry, it just does! 😉

Nothing upsets me more than a bad food experience, so i set out to compensate. Thankfully BA had plenty to offer – great steak, great wine, an ‘all you can eat’ grill, fantastic Italian and more. Think I gained back some of the pounds i dropped in Peru and Bolivia!! I even ate some salad – twice! At a very decent sandwich and salad joint in Palermo. At this point i was starting to wonder how much undigested red meat was resting happily in my guts. Note to self #2: book in for a ‘colonic’.

After 3 months of being constantly on the move, BA provided some welcome respite, and i started to get into a routine that went something like ‘get up, eat, walk, eat, nap, eat, drinks, sleep’. Centro was empanada heaven (baked, not fried), so breakfast (lunch when i slept in) was sorted. We even went to the movies, granted to see a Tom Cruise movie (Jack Reacher), but it was surprisingly not completely shit!

During the fortnight in BA we stayed in four different places, primarily so we could experience different parts of the city. The last place was my favourite – we rented an apartment in Palermo Soho. At this point, the one luxury i was desperately missing was a bubble bath. It’s not completely impossible to find a bathtub in a hostel, but if you are lucky enough to find one they never have plugs. Renting the apartment presented a realistic possibility for a bath, but the lack-of-plug issue remained. This prompted a search of several shops in Centro in an attempt to resolve the issue, with the resulting acquisition of a bath stopping device.  The anticipation was palpable … then we checked-in and discovered there was no bathtub, somewhat a reversal in fortune. Still, there was a swimming pool, and the kitchen presented another opportunity … actually cooking!!

So after eating all that steak, we decided to stay in for a night and cook … steak. When I say ‘we’, I actually mean ‘Brandon’, since my outstanding contribution to the meal was crushing the black pepper (without a pepper mill, please note!!). And somewhere there is photographic evidence of the existence of a creature so rare that sightings are newsworthy … “man in kitchen”. Gasp.

Another great thing about the apartment was the little Italian on the corner of the street – it served a cracking spaghetti ‘a la vongole’, which i ate two lunchtimes in a row. It was this corner that i found myself standing on at 6.30am on the day i was to rejoin the tour, trying to hail a cab to take me to the hotel where the rest of the group were staying. The fortnight had flown past in that way that great vacations always do, and i couldn’t quite believe it was over. I felt completely relaxed, and thought there might be a realistic chance of getting to the end of the tour without killing one of my companions. Possibly, maybe … 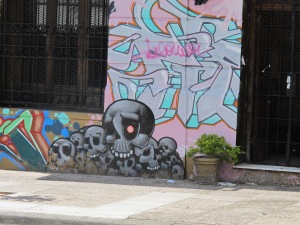 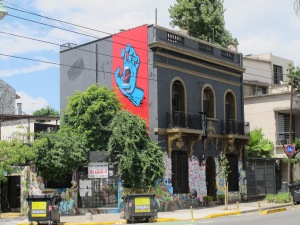 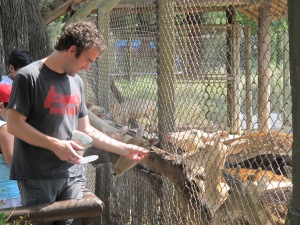 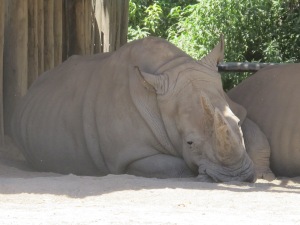 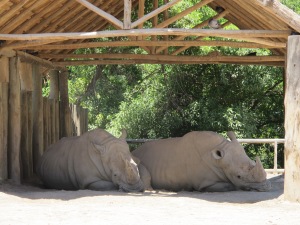 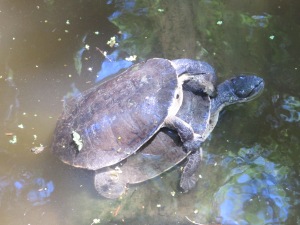 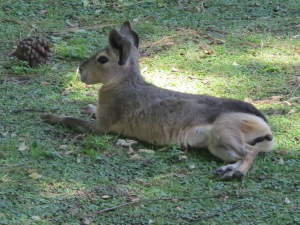 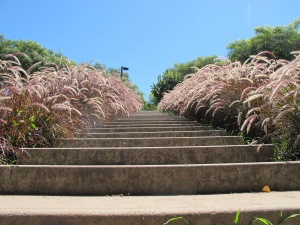 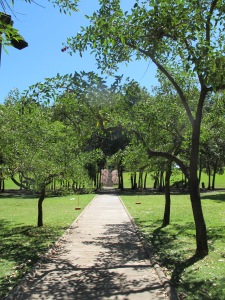 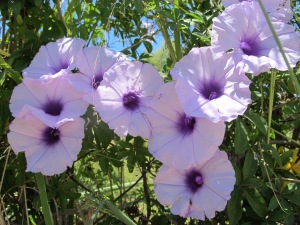 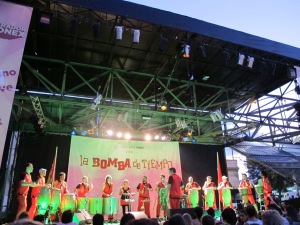 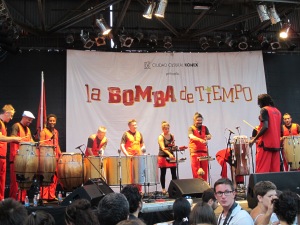 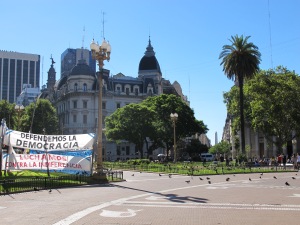 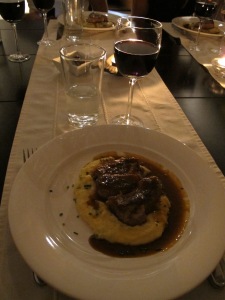 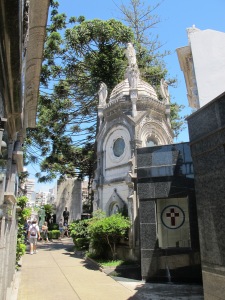 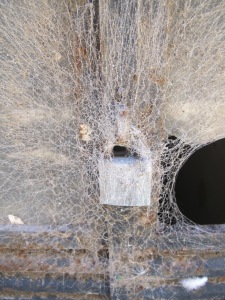 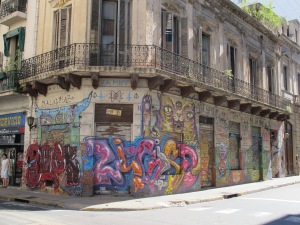 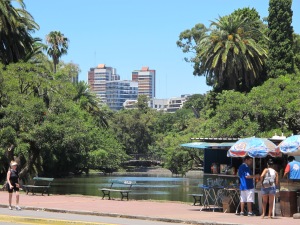 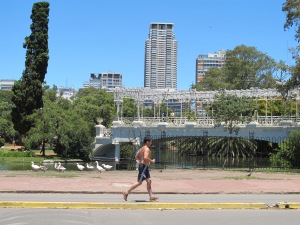 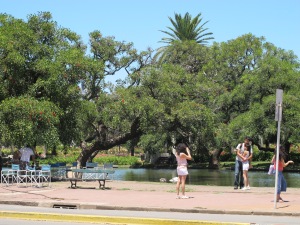 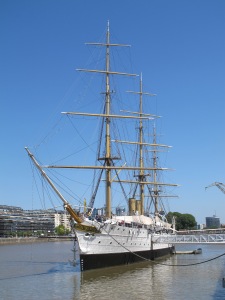 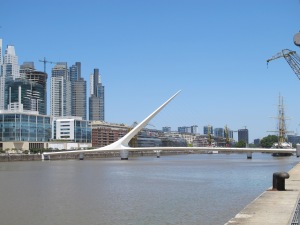